Saturday 8AM to Noon

Looking for a golf cart? Wether Its your first or fourth we are here to serve you. For us Its the service after the sale that counts!﻿

Blacksmith Carts & Service was founded in 1993. It's a family owned and operated business started by John Stadtmueller. The shop building John worked in down town Monticello thru the 90's was an old blacksmith shop, So when thinking of a business name it was a catch. By 2000 it was time to expand Blacksmith Carts moved to its current location on Highway 38 N. just outside Monticello City limits. In 2007 John's oldest son Kalvin joined the team after graduating from high school.

Blacksmith Carts specializes in sales, service and leasing of golf carts. We offer a large inventory of carts. Everything from regular gas & electric carts to modified four passenger lifted carts that are used camping, on farms & acreages, And just driving around town. A large selection of Custom and Refurbished carts are always ready for viewing in our large indoor showroom. The service at Blacksmith Carts does jobs from Oil Changes, Spring Tune Ups, Battery Replacement, To Complete Engine Overhauls. We service most all makes & models. 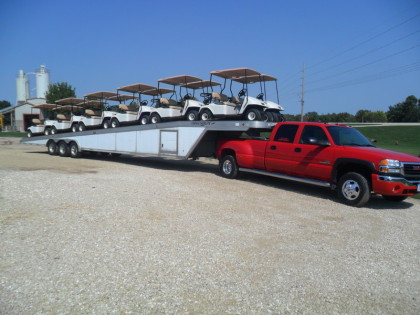